Geneva, 28 April 2017: The new ISO Guidance Principles for the Sustainable Management of Secondary Metals were launched at the Thirteenth Meeting of the Conference of the Parties of the Basel Convention. The launch at the UN meeting in Geneva was the culminating event of a two-year process including 70 stakeholders from approx. 30 different countries which resulted in the publication of the ISO International Workshop Agreement (IWA 19:2017) in mid-April.

The principles aim to provide a credible global framework for the sustainable management of secondary metals. They will improve practices of economic operators, ensure a credible traceability of recovered metals and promote the formalization of economic operators involved in subsistence activities and unofficial business activities. The principles are seen as a major step towards achieving more social equity, environmental justice and optimal recovery in metal recycling worldwide. Marco Buletti (Swiss Federal Office for the Environment) expressed his satisfaction with the project on behalf of the Swiss government. Stephane Sauvage of the ISO Secretariat congratulated the team with the work, which also involved the Swiss Association for Standardization (SNV).

Xaver Edelmann, President of the World Resources Forum, stated that the project fits into the core interest and mission of the WRF – Circular Economy and Resource Efficiency. It is an example, he continued, of WRF’s capability of bringing stakeholders together in consensus building processes, resulting in tangible products, such as these guidelines. The guidelines, he said, have a great potential of changing the lives of poor people and at the same boosting the use of secondary metals in the production of electric and electronical devices worldwide. He thanked research partner Empa for the great collaboration.

The Guidance Principles aim to guide economic operators of secondary metals value chains in the efficient and credible implementation of improved recycling practices. As was recognised by participants this has been a pioneering work. WRF program manager Sonia Valdivia said: “It is the first time ever that issues and concerns of the informal sector have been addressed in an ISO document, in particular in the context of emerging and developing economies.”

Ellen Gunsilius, GIZ Senior Advisor, emphasised the global approach of this ISO document and welcomed the specific and valuable orientations provided for organisations working with informal workers and political partners on upgrading e-waste recycling standards. She stated that it will not be sufficient that product manufacturers and metal smelters merely request their formal and informal suppliers in the value chain to comply with the Guidance Principles, but that they provide support and offer reasonable prices for their products to allow them to comply with these standards.

WRF program director Mathias Schluep introduced the screening of the new Tales of Trash video, which offers a 3-minute introduction to what the Guidance Principles are all about. This video is also available in Spanish: Relatos de Residuos. [Article continues below video]

John Pwamang, Director of Ghana EPA, welcomed the ISO document as key guidance for upcoming challenges related to the implementation of their newly published e-waste legislation for Ghana.

Giulia Carbone from IUCN highlighted the great potential of the provided framework as a “plug-in module” for any metal stewardship initiative to address recycling and developing countries issues, such as in the Aluminium Stewardship Initiative.

During the development process of the document, WRF organised online public reviews and 15 consultation events in Africa, Latin America and India involving more than 1000 stakeholders. This resulted in about 1500 comments raised which were addressed in the final ISO IWA document.

Information about the full Sustainable Recycling Industries project can be found here. Pilot testing and training will take place in Ghana, Colombia, Peru and South Africa.The main deliverables and milestones of the SRI program will be presented at the upcoming WRF 2017 Conference, to be held in Geneva, October 24-25. The idea to develop guidance principles for the sustainable management of secondary metals was proposed by the Sustainable Recycling Industries (SRI) Roundtable, which is an initiative of the World Resources Forum (WRF) and the Swiss Federal Laboratories for Materials Science and Technology (Empa). The development process was assisted by the Swiss Association for Standardization (SNV) and funded by the Swiss State Secretariat for Economic Affairs (SECO).

The 51-page ISO document can be purchased in the online ISO shop. 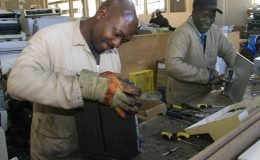